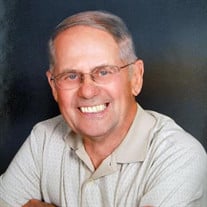 Ronald Lee Castonia aged 89 of Ludington passed away on Monday, December 6, 2021 surrounded by his family. Ron was born on August 5, 1932 in Ludington, the son of Edward L. and Angeline J. (Luskin) Castonia and graduated from St. Simon High School in 1951. He answered the call of his country and proudly served with the United States Army - Medical Corp during the Korean Conflict at the 21st Station Hospital in Korea. Upon his discharge from service, Ron returned home to Ludington and married Yvonne L. Listing on November 9, 1957 at St. Simon Catholic Church. They celebrated 61 years by each other’s side until Yvonne preceded him in death on February 13, 2019. Ron was also preceded in death by his daughter Karen Meyer in 1988; his great-granddaughter Alexis Castonia in 2013; his brothers Louie, George, Leo, Earl, and Roger Castonia; and his sister Yvonne Michael. Ron began working for Klug & Smith Construction where one of their projects was building the Harbison-Walker Refractory. At the conclusion of the construction, Ron became the first person hired to work for Harbison-Walker where he served as an Electrician and Supervisor until his retirement in 1997. Ron also furthered his education, earning an Associate’s Degree from West Shore Community College in 1979. An avid hunter and fisherman, Ron could hardly wait for the respective seasons to open and spent countless hours on the waterways around Mason County and Canada, and rarely missed an opening day during deer season, even trying to make it out one last time this year. While fishing near Wawa in Canada, Ron had the good fortune to catch a record setting Sturgeon for Ontario. When not enjoying the waters or woods, Ron could usually be found enjoying the outdoors gardening or puttering around on his beloved Allis-Chalmers tractor. Ron will be greatly missed by his children Diane (Tony) Zack, Linda (Paul) Northrop, Pamela (Bill) Bannon, Kevin (Suzanna) Castonia, and Brian (Kim) Castonia; his grandchildren Alex Zack (fiancée Jamie Bowman), Jozi (Bobby) Peters, Megan NOrthrup (Peter Henning), Melissa Northrop, Rick (Kristina) Clifton, Lesa (Casey Bowman) Castonia, Adam (Jessica) Castonia, Kelly Virgo (fiancé John Culligan), Shawn (Holly) Virgo, and Joey Castonia; his great-grandchildren Maria, Kaitlyn, Brace, Krista, Karzin, Ellie, Addison, Makena, Emmett, and Mason; his brothers Norbert (Jeanne) Castonia, and Dennis Castonia; and his sister Roselyn Sadler; along with numerous beloved nieces and nephews. The Mass of Christian Burial will be celebrated for Ron at 11:00 am on Saturday, December 11 at St. Mary’s Catholic Church in Custer with Rev. Daniel DePew as celebrant. (Due to a severe allergy in her family, those attending are kindly asked to refrain from wearing perfumes and colognes). (Due to a severe allergy in her family, those attending are kindly asked to refrain from wearing perfumes and colognes). Burial will take place in the spring at St. Mary’s Cemetery. Friends may visit with Ron’s family on Saturday morning from 10:00 am until time of Mass at St. Mary’s Church. Those who wish to remember Ron with a memorial donation are asked to please consider Caritas Food Pantry at St. Mary’s Church, or Hospice of Michigan.

Ronald Lee Castonia aged 89 of Ludington passed away on Monday, December 6, 2021 surrounded by his family. Ron was born on August 5, 1932 in Ludington, the son of Edward L. and Angeline J. (Luskin) Castonia and graduated from St. Simon High... View Obituary & Service Information

The family of Ronald L. Castonia created this Life Tributes page to make it easy to share your memories.

Ronald Lee Castonia aged 89 of Ludington passed away on Monday,...

Send flowers to the Castonia family.