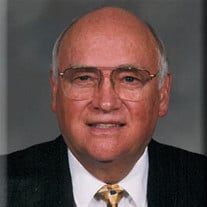 Rev. Dr. Ronald Arlington Houk, aged 81 of Ludington passed away on Friday, June 12, 2015 at Mercy Health St. Mary’s Hospital in Grand Rapids. Dr. Houk was born on June 15, 1933 in Ludington the son of Arlington and Reva (Kistler) Houk, and graduated from Sparta High School. He served his country during the Korean Conflict with the United States Army and earned his Bachelor’s Degree from Asbury University in Kentucky. Dr. Houk continued his education at Asbury Theological Seminary and began his career in ministry on June 7, 1958, the same day he wed AnnaBelle Miller in Benton, Illinois. They have celebrated 57 years of marriage and ministry by each other’s side. Dr. Houk earned his Master’s Degree from Garrett Theological Seminary on the campus of Northwestern University and was bestowed with an Honorary Doctorate degree from Asbury University. In the Army, he served as a Chaplain. He also served as a Minister in the United Methodist Denomination at Dunaway UMC in Winchester, KY, Muskegon Central UMC, Shelby UMC, Eaton Rapids UMC, St. Joseph’s UMC, and as Superintendent of the Lansing District, where he also started a street ministry. In his retirement, he served as Pastor of Crystal Valley/Walkerville UMC, Fountain UMC, and at Community Church in Ludington. He enjoyed returning to the Houk family heritage of fruit farming, and also liked to spend time growing many varieties of vegetables in his garden. Dr. Houk was preceded in death by his parents and his sister Audrey Warren. He will be greatly missed by his wife AnnaBelle, his son Jonathan Houk and fiancée Molly Stivers, his daughter Jennifer MacDonald and husband Rommie, his grandchildren Michael and Melody Houk, and step grandchildren Jake and Gretchen Stivers, his sister Barbara Miltibarger and her husband Lowell, his niece, numerous nephews and cousins, along with the many churches and communities he served. Funeral services will be held for Dr. Houk at 3:00 pm on Saturday, June 20 at the United Methodist Church of Ludington, 5810 Bryant Avenue with burial to follow at Summit Township Cemetery. Friends may visit with his family on Friday evening from 6:00 – 8:00 pm, and Saturday afternoon from 2:00 – 3:00 pm at the church. Those who wish to make contributions in memory of Ronald are asked to consider the Clark Retirement Community in Grand Rapids, or the United Methodist Church of Ludington.

The family of Rev. Dr. Ronald A. Houk created this Life Tributes page to make it easy to share your memories.

Send flowers to the Houk family.