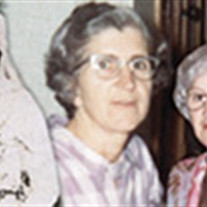 With a tender heart and nurturing touch, Rose Rudnicki viewed caring for her family as both her greatest calling and favorite blessing. She was a virtuous woman in many ways and her selflessness was intertwined throughout her thoughts, words,... View Obituary & Service Information

The family of Rose Ann Rudnicki created this Life Tributes page to make it easy to share your memories.

With a tender heart and nurturing touch, Rose Rudnicki viewed...

Send flowers to the Rudnicki family.