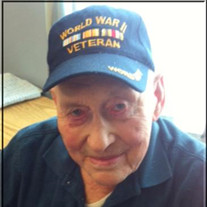 Russell “Wayne” Saxton Sr., age 95 of Ludington passed away Saturday, February 13, 2016 at Oceana Medical Care Facility in Hart where he had resided along with his wife of 74 years, Alice. Wayne was born November 18, 1920 in Ludington the son of William and Miriam (Erbaugh) Saxton and spent his early years in the Custer area where he attended school. He had fond memories of living in Custer. Wayne graduated from Ludington High School with the class of 1939. He was a member of the Sugar Ridge Church of the Brethren, which he attended as a child along with his parents. Wayne married Alice Marie Fisher on December 24, 1941 at 808 E. Loomis St. in Ludington and she survives. Within a year of their marriage, he was inducted into the US Army and served as a radioman for 24 months in the Aleutian Islands serving in Kiska, Attu & Adak during World War II. Upon returning from the war he partnered with his father and brother at Saxton Builders. In 1951, Wayne went to work for the City of Ludington as Lakeview Cemetery Superintendent, retiring after more than thirty years of service. He was an avid fisherman and in 1986, was proud to land a trophy Tiger Musky from Hamlin Lake! He enjoyed carving ice fishing decoys and fish carvings, loved to bowl, and enjoyed the friends he made on his bowling team. Wayne will be lovingly remembered by his family including his wife Alice, his daughter, Carol (David) Dorrell of Fort Myers, Florida, his two sons Russell W. (Kathleen) Saxton and Robert L. Saxton both of Ludington, ten grand children and numerous great grand children, nieces and nephews. He is also survived by one sister in law Beverly Saxton of Ludington. He was preceded in death by his parents, one sister and one brother. Memorial services will be held at a later date and burial will take place at Lakeview Cemetery in Ludington. Those wishing to make an expression of sympathy asked to consider the charity of their choice. Please visit Wayne’s personal memory page at www.wymanfuneralservice.com to leave a tribute of Wayne for his family, or to light a candle in his memory.

The family of Russell "Wayne" Saxton Sr. created this Life Tributes page to make it easy to share your memories.