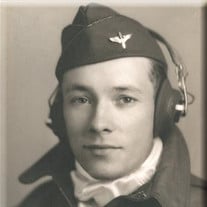 Russell Frederick Williams aged 95 of Walhalla passed away on Thursday, January 8, 2015 at Oakview Medical Care Facility in Ludington. Russ was born on February 13, 1919 in Mt. Carmel, Illinois to F. Earl and Sadie Edith (Winkler) Williams, and graduated from Rochester, IN High School in 1936. Following his graduation he worked various jobs before answering the call of his country and entering the military in 1941. He eventually became a flight instructor in the U.S. Army Air Corps, teaching pilots to fly by instruments. On August 16, 1942 he married Evelyn Arvella Enyart in Phenix City, AL and they celebrated 66 years together before Evelyn preceded him in death in 2008. Following his discharge from the military in 1944, Russ and Evelyn moved to Walhalla where he worked 13 years at Star Watch Case in Ludington before becoming caretaker of Watassa, a summer estate on the Pere Marquette River. Russ worked full-time at the ranch until 1984, easing into retirement by cutting back to part-time status. Russ enjoyed singing and playing the guitar, bowling, playing ping-pong, bird watching, deer hunting, the beauty of wildflowers, and following the Detroit Tigers. He will be lovingly remembered and greatly missed by his children Penny and David Buffenbarger of Midland, David and Debby Williams of Walhalla, his six grandchildren Jason and Amy Williams of Scottville, Jody and Scott Dickinson of Ludington, Jessica and Jeff Kaiser, Jamie and Tim Rafter all of Walhalla, Eric Buffenbarger of Redford, and Ryan and Candy Buffenbarger of New Carlisle, OH. He is also remembered by his 12 great-grandchildren Lauren Williams, Lillian, Brian, and Maxwell Dickinson, Kaitlynn, Madison, and Riley Kaiser, Melody, Alayna, and Arianna Rafter, and Elizabeth and William Buffenbarger, his brother Frank and Nancy Lindley of Indiana, his sisters-in-law Lee Williams of Mt. Pleasant, and Norma Jean and Dale Becker of Indiana, his brothers-in-law Raymond and Ruth Enyart, Emerson and Barb Enyart, and Carl and Pat Enyart all of Indiana, and numerous nieces and nephews. Along with his wife Evelyn, Russ was also preceded in death by his parents, his brother Ed Williams, and his sisters Eleanor Castleman, Mary Jane Hinkle, and Peggy Mullins. Graveside services will be held for Russ at Brookside Cemetery in Scottville in the spring. There will be no funeral home visitation or services at this time. Those who wish to make a contribution in Russ’ memory may do so to a charity of the donor's choice.

The family of Russell F. Williams created this Life Tributes page to make it easy to share your memories.

Russell Frederick Williams aged 95 of Walhalla passed away on...

Send flowers to the Williams family.