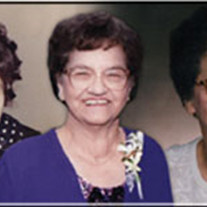 RUTH'S OBITUARY:Ruth Sophie Bogner, aged 89, a lifelong resident of Carr Settlement passed away peacefully October 5, 2013 at her home surrounded by her family.She died from congestive heart failure while under Heartland Hospice Care.Ruth was born Biruta Sophie Maleckas on April 27, 1924 and grew up in Custer, Michigan with her two siblings and parents Frank and Valeria Maleckas who migrated from Lithuania to the United States in 1906. Ruth graduated from Custer High School in 1942. In June of 1942 she eloped and married Otto Raphael Bogner in Manistee.Otto was drafted into World War II and Ruth lived in Custer, Muskegon and North Carolina while Otto served as a Sergeant during World War II. When the war ended, they moved to Carr, Michigan in 1945 and together they operated a small dairy farm for 36 years and the Carr Telephone Company. Ruth served as Treasurer for the Company for 46 years. In her spare time Ruth loved her flower gardens and grew many beautiful flowers and trees. Ruth also loved playing bingo, shopping for jewelry, travelling, and spending time with her family. She was a lifetime member of St. Mary’s Church in Custer.Surviving are her children, Cheryl Bogner of Mt. Clemens, Roger Bogner of Ludington, Ronald (Rhonda) Bogner of Muskegon, Mitchel (Toni) Bogner of Branch and Terri Bogner (Wayne) Rinkevicz of Branch. A sister, Veronica (Robert) Pochyla of Shelby and eight grandchildren, Renay Bogner Mihalek, Chris Bogner, Brooke, Kyle and Cody Bogner, Tom and Rachel Bogner, and Rosemary Hoffman. Three great-grandchildren, Ethan Bogner, Rylen and Rhys Mihalek and two special dogs, Lacey and Ziggy.She was preceded in death by her husband, Otto in 1991, an infant daughter, Mary in 1964, brother, Frank Maleckas, Jr. in 2013. The Mass of Christian Burial will be celebrated for Ruth on Wednesday, October 9 at 11:00 AM with her dear friend Rev. Joe Fix as celebrant. Burial will follow at St. Mary’s Cemetery. Friends may meet with her family for a time of visitation on Tuesday evening from 6:00 – 9:00 PM at the Stephens Funeral Home in Scottville, where the Rosary will be prayed for Ruth at 8:00 PM led by her pastor, Rev. Anton Tran.

The family of Ruth Sophie Bogner created this Life Tributes page to make it easy to share your memories.

Send flowers to the Bogner family.