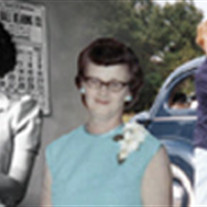 Ruth Kudich was a woman of integrity who dearly loved her family and friends. She worked hard to take care of them, and knew there was always a lesson to be learned. Always ready to meet someone new, Ruth was out-going, very friendly and fun... View Obituary & Service Information

The family of Ruth A Kudich created this Life Tributes page to make it easy to share your memories.

Ruth Kudich was a woman of integrity who dearly loved her family...

Send flowers to the Kudich family.