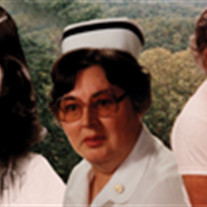 Ruth Thue was a woman who collected stones, which she lovingly polished, shaped, and turned into something so beautiful. She did the same with the people and relationships around her, as a beloved wife, mother and grandmother, as a caring nurse and loyal friend. Ruth was such a compassionate, kindhearted woman, who made our lives more beautiful just by knowing her.Ruth’s story began on a warm summer day in 1932, in the little Northern Michigan town of Manton. Those were such dark days in this country, which was caught in the teeth of the Great Depression. Times were tough for so many, but Robert and Ina (Gumm) Norman found a reason to celebrate on August 26, 1932, with the birth of a beautiful baby girl, a daughter they named Ruth Isla Norman.Ruth was joined by her five brothers and sisters on the family’s farm in Manton, Ona, Eleanor, Millie, David and Richard. Everyone had to do their fair share around the farm, and Ruth became very close to her dad growing up, helping him with the chores, and becoming a bit of a tom-boy as a result.Ruth’s childhood was far more than farm and field, though. She was also musically gifted, and learned to play the piano and the coronet, which she played in the Manton High School band. After she graduated in 1950, Ruth stayed at home and helped her family on the farm. It wasn’t long before she would have a family of her own to think about, however.One evening Ruth met a handsome young man named Eugene Thue at a local barn dance, which were so popular in those days, and the sparks flew between them. They soon began dating, and were married on November 22, 1952 in Muskegon, where the newlyweds settled.The happy young couple quickly became parents, with their daughter Gayle born in late January of 1954. She had to deliver Gayle without the help of her new husband, however, as he was called to serve in the Korean War, and left shortly before she was born. When he was discharged, Eugene found work at Wolverine Trucking to provide for his family, which would soon be growing. Ruth and Eugene welcomed their son Robert in 1956, followed by Douglas in 1958. Their third son, Norman, sadly died at birth in 1963.In 1964, the family left Muskegon, moving north to Scottville. They did much as a family there, especially taking many camping trips to Ludington State Park nearby, or just heading over to enjoy a day at the Lake Michigan beach together. They also never missed the Christmas Eve midnight Mass together, either.Ruth was a wonderful wife and mother, who was so devoted to her family. Her son Robert fondly recalls his mother teaching him to dance when he was little, and how she always sang so beautifully while playing the piano in their home.In the late 1970s, Ruth decided to go back to school, and began taking nursing school classes at West Shore Community College. She eventually earned her Registered Nurses degree, as a member of the school’s first class of nurses. She worked at Butterworth Hospital in Grand Rapids, as well as a Home Healthcare nurse in Ludington. Ruth made a wonderful nurse, with her caring, compassionate bedside manner, and her light sense of humor setting her patients at ease, just as it did everyone who met her.Ruth and Eugene were very industrious people, and also ran a refrigeration business for a short time. By the time Eugene retired in the early 1990s, they had saved enough to buy a home in Sun City, Arizona. Ruth continued nursing there, and the couple were also active members of the St. Charles Borromeo Catholic Church in Peoria, Arizona. Ruth was a member of the St. Vincent de Paul Society and the Altar Society, as well.Ruth was also a lifelong “rock hound,” collecting all manner of rough-hewn rocks, which she cut, shaped and polished into beautiful jewelry. Her children, grandchildren, and even great-grandchildren all helped her unearth unusual stones, which she turned into rosary beads, necklaces, earrings and more. That was Ruth, though. She knew that with a little love, a little nurturing, and a little polish, everything could shine to its true potential.Ruth’s beloved Eugene died two days before Christmas in 2002, which affected her deeply. She moved back to Ludington to be closer to her family. She became very active with St. Simon Catholic Church , and with the Right to Life movement. Sadly, Ruth became ill, and was admitted to the Memorial Medical Center in Ludington. Her spirits remained high, and she was even joking with her family by her bedside. Sadly, Ruth died on Saturday morning, October 13, 2007, at the age of 75.Ruth will be lovingly remembered by her children Gayle Houghton of Ludington, Robert (Sharon) Thue of Kingsley, and Douglas (Robin) Thue of Homosassa, Florida; her grandchildren Gary (Laura) Hardenburgh, Gina Stearns, Eric Houghton, Shannon (Rob) Tengdin, Michael, Nicole, and Brianna Thue; 11 great-grandchildren; her brothers and sisters Ona Briggs of Whitehall, Eleanor Norman of North Muskegon, Millie Norman of Prescott, Arizona, David Norman of Newaygo, Richard (Louise) Norman of Manton and Florida; her sister-in-law Jeanne (Joe) Gabris of Muskegon, and many nieces and nephews.

Ruth Thue was a woman who collected stones, which she lovingly polished, shaped, and turned into something so beautiful. She did the same with the people and relationships around her, as a beloved wife, mother and grandmother, as a caring nurse... View Obituary & Service Information

The family of Ruth Isla Thue created this Life Tributes page to make it easy to share your memories.

Ruth Thue was a woman who collected stones, which she lovingly...

Send flowers to the Thue family.