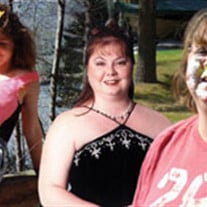 Sami Jo Hays was always eager to share her enthusiasm for life with others. She approached life as the ultimate adventure and pursued it full throttle, always with a smile on her face. Sami had a big heart and an endless capacity to love, which... View Obituary & Service Information

The family of Samantha Jo Hays created this Life Tributes page to make it easy to share your memories.

Sami Jo Hays was always eager to share her enthusiasm for life...

Send flowers to the Hays family.