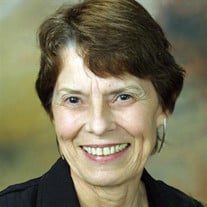 Shirley Jean Taranto-Petroski aged 78 of Branch, formerly of Williamston, beloved wife, mother, sister, aunt, cousin and friend passed away peacefully Friday evening July 26, 2019 at her home. Shirley was born on May 4, 1941 in Lansing, the daughter of John and Stella (Klieber) Hasford and graduated from Resurrection High School with the class of 1959. Following graduation, she served her country with the United States Air Force. On October 8, 2005 she married Richard F. Petroski at St. Mary’s Catholic Church in Williamston and they have been blessed with 14 years together. Shirley was a woman of great faith, had a kind loving heart, and a warm, welcoming smile. She cared deeply for her friends and family and cherished time with them. Since her retirement from General Motors in 2003 she enjoyed her life up north, gardening, fishing, and quilting. She also was an active member of St. Mary’s Catholic Church in Custer, sharing her love of music and devotion to the Blessed Mother. Shirley was preceded in death by her parents, her first husband Richard Taranto, her sons Kenneth James and Louis John, her brother John L. Hasford II, and her great grandson Brady. Shirley will be greatly missed by her husband Richard Petroski, her children Anthony Taranto, Ric Taranto, Nancy (Mike) Misailedes, and Ken Taranto, her grandchildren Monica (Mike), Danny, Dustin, Adam, A.J. (Alli), Josh, Samantha, Luke, and Karley, five great- grandchildren Lalee, Morgan, Cece, Alexandra, and Arabella, her stepdaughters Julie Maleipaard and Jodie Leonard, and her brother James (Janet) Hasford. The Mass of Christian Burial will be celebrated for Shirley at 10:00 am on Monday, August 5 at St. Mary’s Catholic Church in Custer with Rev. Daniel DePew as celebrant. Graveside services with military honors will take place at 3:00 pm on Monday at Mount Calvary Cemetery in Williamston. A time of visitation with Shirley’s family will be held on Sunday evening, August 4 from 6:00 – 8:00 pm at St. Mary’s Church in Custer with the Rosary to be prayed for Shirley starting at 7:30 pm. Those who wish to remember Shirley with a memorial donation are asked to consider St. Mary’s Church in Custer or Williamston.

The family of Shirley Taranto Petroski created this Life Tributes page to make it easy to share your memories.

Send flowers to the Petroski family.