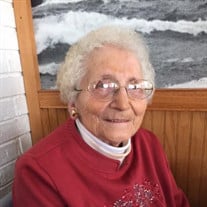 On a mild January Sunday in 1926 just after ringing in the New Year, John and Beatrice (Jankowski) Thompson were blessed with the birth of their daughter Stella Oldonna. Stella was born at home on the farm her parents operated three miles south of Custer on January 3, 1926. As most farming families of the day, everyone pitched in to help with chores, caring for the animals, and working the fields. She attended the McClellan School on the corner of Reek and Hansen Roads and later graduated from Custer High School with the class of 1943. With the war of WW II raging on in Europe and the Pacific, Stella moved to Detroit to help keep America running, working first at Federal Department Store, then Michigan Bell and eventually at Nabisco. While attending a dance with friends on Livernois Street in Detroit, Stella was introduced to John Bardos. They enjoyed each other’s company, attending dances together and a love for Polka’s. They married on June 22, 1946 at St. Luke’s Catholic Church in Detroit. With GI’s returning home, the couple decided to move north, first to Mt. Pleasant where they welcomed daughters Patricia and Janet into their family, and eventually returning to Mason County in 1952, where they welcomed son Michael and daughter Mary Yvonne into the family. John and Stella purchased a dairy farm south of Custer, which their family would operate for 37 years. Stella was able to pass on her childhood lessons from the farm by involving their children in the daily operation as well. In the later years, she also supplemented the family income by working for Stokely’s Cannery in Scottville in the Cold Storage processing plant. Her beloved John passed away in March of 1983 after the couple was able to celebrate 36 years together. Even after selling the farm, Stella was still able to enjoy gardening and also loved to crochet. Her favorite activity was joining her friends for adventures traveling to local casinos throughout northern Michigan. They would board a bus stopping at various casinos on the way up, stay overnight and hit the casinos on the way back home. Stella was introduced to Marvin “Marty” Storrs, who she met through her daughter Mary, and they enjoyed each other’s company traveling together on senior trips, playing cards with friends, and spending time at the VFW Post Marty was a member of. They married in February 1987 in Las Vegas and were able to celebrate 11 years together before Marty preceded her in death in May of 1998. Stella was also preceded in death by her parents, her son-in-law Chester Budzynski, her sister Anita Budzynski, and her brothers Charles and Edward Thompson. Stella will be lovingly remembered by her children Patricia Ann Budzynski of Central Lake, Janet Marie (Michael) VandeVoorde, Michael John (Theresa) Bardos, and Mary Yvonne (Michael) Stalter all of Custer, her grandchildren Rebecca (Marc Cohen) Budzynski, Jeffrey (Julie) Budzynski, Tina Marie (Jeff) Kelley, Joseph (Lin) Bardos, Jennifer (Greg) Yezac, Kimberly Bardos, Brenda Stalter, and Jason (Andrea) Stalter, her great-grandchildren Evelyn and Oliver Cohen, Robbie and Thomas Budzynski, Amanda and Allison Kelley, Elizabeth Bardos, Kyle, Ryan, and Connor Yezac, her sister Margaret Walunas of Ludington, and many nieces and nephews. The Mass of Christian Burial will be celebrated at 11:00 am on Wednesday, November 22 at St. Mary’s Catholic Church in Custer with Rev. Dan DePew as celebrant. Burial will take place at St. Mary’s Cemetery. Friends may meet with her family for a time of visitation on Wednesday morning from 10:00 – 11:00 am at the church. Those who wish to remember Stella with a memorial donation are asked to consider St. Mary’s Church.

On a mild January Sunday in 1926 just after ringing in the New Year, John and Beatrice (Jankowski) Thompson were blessed with the birth of their daughter Stella Oldonna. Stella was born at home on the farm her parents operated three miles south... View Obituary & Service Information

The family of Stella Bardos Storrs created this Life Tributes page to make it easy to share your memories.

On a mild January Sunday in 1926 just after ringing in the New...

Send flowers to the Storrs family.