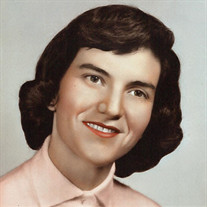 Thelma J. Matiash aged 86 of Scottville passed away on Saturday, January 4, 2020. Thelma was born on September 4, 1933 in Richmond, Kentucky, the daughter of James and Stella (Cosby) Parke and was one of 10 children. After earning her Bachelor’s Degree from Eastern Kentucky University, Thelma moved north to teach Home Economics at Shelby High School from 1955-1960, better known to her students as “Miss Parke.” On March 19, 1960 she married Nicholas Matiash and they welcomed four children into their family. In addition to raising their children and being a homemaker, Thelma enjoyed her “other” children at school as a substitute teacher for the Whitehall school district. Thelma loved to sing, and in 1994, she and Nick moved to Scottville and joined the Scottville United Methodist Church where Thelma was an active member of the church choir for many years. Thelma was preceded in death by her parents, her son-in-law Brian Webster, her granddaughter Olivia Matiash, 8 siblings, and several in-laws. She will be greatly missed by her husband Nicholas; her son Nicholas Paul (Melissa) Matiash; her daughters Jean (Sam) Kubiak, Karen (Gary) Gheller, and Stephanie (Dale) Matiash-Iverson; her grandchildren Amanda, Nicole, Joshua, Richard, Katie, Alyssa, and Liberty; her sister Norma (Don) Bow; her sisters-in-law Dene Parke and Jewell Parke; and many nieces and nephews. Funeral services will be held for Thelma at 12:00 noon on Thursday, January 9 at Scottville United Methodist Church with Pastor Rick Hodgeson officiating. Burial will take place at Brookside Cemetery in Scottville later in the spring. Friends may meet with her family during a time of visitation on Wednesday evening from 6:00-8:00 pm at Wyman Funeral & Cremation Services in Scottville, and on Thursday morning from 11:00 am until time of services at the church. Those who wish to make a donation in Thelma’s memory are asked to consider either Elara Hospice, or the Scottville United Methodist Church.

Thelma J. Matiash aged 86 of Scottville passed away on Saturday, January 4, 2020. Thelma was born on September 4, 1933 in Richmond, Kentucky, the daughter of James and Stella (Cosby) Parke and was one of 10 children. After earning her Bachelor&#8217;s... View Obituary & Service Information

The family of Thelma J. Matiash created this Life Tributes page to make it easy to share your memories.

Thelma J. Matiash aged 86 of Scottville passed away on Saturday,...

Send flowers to the Matiash family.