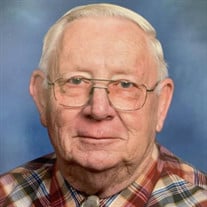 Thomas “Tom” Skridulis aged 79 of Scottville passed away on August 21, 2021 at home under Hospice care following a long battle with Prostate cancer. Tom was born on April 28, 1942 in Ludington on Filer Street, the son of John S. and Ella G. (Shimke) Skridulis. He grew up in Ludington attending St. Simon Schools, but graduated from Ludington High School with the class of 1960. Tom furthered his education earning an Associate in Accounting degree from Muskegon Community College. From April 1964 to April 1966, Tom honorably served his country with the US Army at Ft. Hood, Texas in the 2nd Armored Division. During that time, he married Sherry A. (Booker) Skridulis and they celebrated 56 years by each other’s side. Tom’s career started with Bender & Louden Motor Freight in Muskegon and included Arkansas Best Freight in Chicago, sales & management with Transamerican Freight Lines in Grand Rapids, Battle Creek, Kalamazoo, and Racine Wisconsin before returning to Michigan to manage the Scottville Trucking Terminal of Wolverine Express for 7 years. In 1977, Tom purchased J-K Advertising which he operated until retirement in 2004. Tom’s service to the Mason County community included time with Kiwanis Club, Chamber of Commerce, Amber Township Planning Commission, Power Squadron, Yacht Club, and Fin & Feather Club. The Mason County area held a special place in Tom’s heart and it’s where he wanted to raise their twins. He enjoyed boating, the lakes, fishing, camping and hunting. After retirement, Tom and Sherry spent many years as “Winter Texans” at S. Padre Island and San Benito, Texas, not missing the snow. Tom valued the friendships held since childhood with fond memories, many of which included Bruce and Jackie Krieger, and Bill and Geri Laird. Family is grateful for the support and assistance provided by new and old friends throughout his life and especially the last few years. Tom was preceded in death by his parents John S. and Ella G. (Shimke) Skridulis; his brother and wife John C. and Dianne Skridulis; and his sister Alice Skridulis. Tom is survived by the following family members: wife Sherry Skridulis; son David Skridulis and his daughter Francesca; daughter Julie (John) Steinbeck and their daughter Madelyn; sisters Mary Ellen (Frank) Schaner and Ruth Ann (Randy) Burkall; along with numerous nieces and nephews. According to Tom’s wishes, there will be no services and cremation has taken place. Those who wish to remember Tom with a memorial donation are asked to please consider the American Legion Post #76, the Mason County Fin & Feather Club, or any foundation of your choice.

Thomas &#8220;Tom&#8221; Skridulis aged 79 of Scottville passed away on August 21, 2021 at home under Hospice care following a long battle with Prostate cancer. Tom was born on April 28, 1942 in Ludington on Filer Street, the son of John S.... View Obituary & Service Information

The family of Thomas "Tom" Skridulis created this Life Tributes page to make it easy to share your memories.

Thomas “Tom” Skridulis aged 79 of Scottville passed away on August...

Send flowers to the Skridulis family.