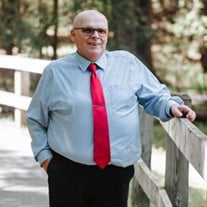 Thomas M. VanSickle age 67 of Scottville passed away on Saturday, June 4, 2022 at his home. Tom was born on September 28, 1954 in Ludington, the son of Robert L. and Dorothy (Budzynski) VanSickle and graduated from Mason County Eastern High School with the class of 1973. He furthered his education at West Shore Community College where he graduated with an Associate’s Degree from the Police Academy for Law Enforcement. Tom started his law enforcement career as a Reserve Deputy with the Mason County Sheriff Department before serving 25 years as a Corrections Deputy with the Lake County Sheriff Department. Tom also served as Fire Chief for Fountain Fire Department for a few years and was elected Fountain Town Constable, a position he proudly served before joining Lake County. On July 4, 1985, Tom married Janet Lewis and they celebrated 7 years together before Janet preceded him in death on March 7, 1992. Their marriage also brought Janet’s daughter Jaime into his life, whom he loved as his own. Tom later married Kimberly Goff on October 13, 2001 and she preceded him in death on September 28, 2010. The marriage to Kimberly also brought her children Josh, Gabriel, and Kaitlin into his life as well. Tom was an enthusiastic sportsman. Summers were spent fishing, camping with family, or playing softball, especially the annual family reunion north vs. south ballgame. Fall was reserved for hunting, which was probably his most favorite time of year. Winters would find him snowmobiling and getting together with family for the holidays. Along with his wives Janet and Kimberly, Tom was preceded in death by his parents Robert and Dorothy and his sister SueEllen. He will be greatly missed by his children Jaime (Stewart) Heath of Fountain, Josh Walker, Gabriel (Michelle) Walker, and Kaitlin (Casey) Lakari all of Scottville; his grandchildren Simon Douglas, Lena Sykes, Quincy Fenner, Maloree Walker, and Harvie Walker; his brothers Alvin (Linda) VanSickle of Fountain, Charles “Pudge” (Julie) VanSickle of Custer, and Jim (Jeanne) VanSickle also of Fountain; his very good friends Christopher Hampton of Scottville and Linda McIntosh of Fountain; along with many nieces, nephews, cousins, and numerous friends. Funeral services will be held for Tom at 1:00 pm on Monday, June 13 at Wyman Funeral & Cremation Services in Scottville with burial to follow at Fountain Cemetery. Friends may greet his family on Sunday evening from 6:00 – 8:00 pm, and on Monday from 12:00 noon until time of services at the funeral home. Those who wish to remember Tom with a memorial donation are asked to please consider the American Cancer Society - Relay for Life.

Thomas M. VanSickle age 67 of Scottville passed away on Saturday, June 4, 2022 at his home. Tom was born on September 28, 1954 in Ludington, the son of Robert L. and Dorothy (Budzynski) VanSickle and graduated from Mason County Eastern High... View Obituary & Service Information

The family of Thomas VanSickle created this Life Tributes page to make it easy to share your memories.

Thomas M. VanSickle age 67 of Scottville passed away on Saturday,...

Send flowers to the VanSickle family.