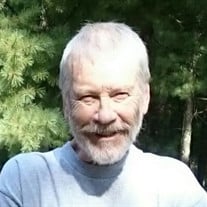 Timothy Barry “Tim” McKeon aged 62 of Manistee, longtime resident of Mount Clemens, passed away on Friday, September 15, 2017. Tim was born on October 10, 1954 in Guelph, Ontario, Canada, the son of Joseph Barry and Margaret Joan (Coles) McKeon. On June 3, 1977 he married Lenore Ann Dunsmore at the St. Louis Catholic Church in Clinton Twp. and they have walked side-by-side for the last 40 years. Tim worked for Hewlett-Packard EDS for over 33 years, retiring in 2015. In his retirement, he was able to fulfill his dream of living on a beautiful river in northern Michigan where he could enjoy his love of fishing. Tim enjoyed many hobbies in his life including riding his motorcycle, following the Detroit Red Wings, listening to classic rock, and researching military history, especially the World Wars and the role of the Royal Canadian Air Force. Lately living on the river, he found a new hobby in bird watching as well. Tim and Lenore were active members of St. Bernard Catholic Church in Irons, and formerly of St. Thecla Catholic Church in Clinton Twp. where Tim also served with the Knights of Columbus. Even with his many hobbies and active life, Tim always found his greatest joy in the presence of his wife Lenore and their sons Shaun and Patrick. Tim was preceded in death by his father Barry McKeon and his father-in-law Leo Dunsmore. Along with his wife Lenore, Tim will be greatly missed by sons Shaun of Lansing, and Patrick of Rochester Hills; his mother Joan McKeon of Mount Clemens; his sisters Wendy Graham of Essexville, and Mary Elizabeth Kehrig and husband Earl Kansier of Harrison Twp.; his brother David McKeon and wife Debbie of Williamsburg; his mother-in-law Patricia Dunsmore of Mount Clemens; his sisters-in-law Mary Carter of Clinton Twp., Patricia Insana and husband Glenn of Shelby Twp., and Susan Savage and husband Doug of Harrison Twp; along with many nieces, nephews, cousins, and wonderful friends. The Mass of Christian Burial will be celebrated for Tim at 11:00 am on Thursday, September 21 at the St. Bernard’s Catholic Church, 5734 W. 10 ½ Mile Rd., Irons, MI 49644. Burial will follow at St. John Cantius Cemetery in Free Soil. Friends may meet with his family for a time of visitation on Wednesday evening from 6:00 – 8:00 pm, and Thursday morning from 10:00 – 11:00 am at the church, with a Prayer Service to be held Wednesday evening at 7:30 pm. Those who wish to remember Tim with a memorial donation are asked to consider St. Bernard’s Church, or the Little Manistee Watershed Conservation Council. Envelopes will be available at the church.

The family of Timothy Barry McKeon created this Life Tributes page to make it easy to share your memories.

Send flowers to the McKeon family.