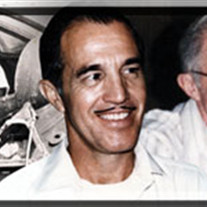 LIFE STORY:Urbain Bernier filled a lifetime with the love of family. An unassuming man whose actions spoke volumes for his character, he was in all ways a genuine good natured man with whom others could rely. A wonderful storyteller, he often... View Obituary & Service Information

The family of Urban N. Bernier created this Life Tributes page to make it easy to share your memories.

LIFE STORY:Urbain Bernier filled a lifetime with the love of...

Send flowers to the Bernier family.