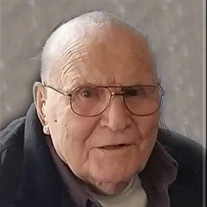 Once a farmer, always a farmer holds far more meaning than the simple statement would suggest and could easily sum up the life of Versal Beemer. Versal Vernard Beemer was born on Monday, January 4, 1926 in the small farming community of Morley, Michigan. Versal was the first of seven children born to Foster Franklin and Iva Roseanne (Seaton) Beemer and learned many valuable lessons growing up on their small farm in Mecosta County. As the oldest, Versal not only had to help with daily chores on the farm, but was also called upon to run the farm when his father became disabled, losing his hand in a farming accident. Versal attended school in a one room schoolhouse in nearby Sylvester before attending Morley High School. During his 10th grade year he left school to help out on the farm like many young men needed to do at that time.. One day while venturing into Lakeview with some friends, Versal and his pals happened upon a group of young ladies, one of whom was dating his buddy. As they offered the girls a ride, Versal’s life changed as Myrna Taylor jumped into to the car beside him. They married on March 21, 1946 in Lakeview and settled into farm life in Morley. Their family soon grew to include John, Larry, Mary, and Ronald. Versal and Myrna worked hard to provide for their family, instilling strong work ethic and core values. On the farm there was the right way to do things, the wrong way to do things, and Versal’s way to do things. Along with farming, Versal also hauled cream for the local dairy for a short time to subsidize their income. Not long after, a part-time position with the local ASCS office in Big Rapids came available. During his employment there, Versal recognized the importance for him to finish his education, returning to the classroom and earning his Diploma through Big Rapids High School in 1969. A year prior, Versal and Myrna moved their family to Mason County where he took a full-time position with the USDA Soil Conservation office in Scottville. Determined to finish his education, he and Myrna drove back and forth to Big Rapids every week. Versal retired from the USDA office in 1986 and soon began working for Stokely’s Cannery in Scottville as a Fieldman. He and Myrna enjoyed riding to work together until finally retiring in the mid-90’s. In retirement, they were able to enjoy their fruits of hard work, traveling to England, Holland, Hawaii, and Mexico while soaking in the warmer temps of Texas during the winter months. Growing up on the farm, Versal was no stranger to hard work, but also learned the value of enjoying life along the way. He loved to hunt and fish, enjoying trips out west or to Canada pursuing the elusive Elk, Moose, and Bear, while closer to home, he never missed opening day of deer season with the boys. Versal also found great enjoyment as a Beekeeper. Sunday’s were often reserved for floating on the river with the kids, sharing a great story, or just relaxing at home. He loved spending time with his family, helping them whenever possible, leaning on the lessons learned from farm life. He witnessed a lot of change through his lifetime on the farm, in his community, and in the world. One of the greatest lessons left for his family could be summed up in the statement “We Enjoyed Life.” Versal Beemer passed away quietly on Saturday, May 6, 2017 at Spectrum Health Ludington Hospital. Versal was preceded in death by his beloved wife of 70 years, Myrna on July 16, 2016. He was also preceded in death by his parents and his brothers Basil, Mervin, Duane, and Lennie Beemer. Versal will be greatly missed by his children John (Norma) Beemer of Stockbridge, Larry (Judy) Beemer of Clarkston, Mary (David) Hasenbank of Free Soil, and Ronald (Renee) Beemer of Scottville, 12 grandchildren, 15 great-grandchildren, his sisters Marjorie Schuitema of Cedar Springs, and Nelda Carpenter of Potterville, and many nieces and nephews. Versal was a longtime member of Our Savior Lutheran Church in Scottville where Funeral Services will be held for him at 12:00 pm on Wednesday, May 10th with Rev. James Schroeder officiating. Burial will follow at Maple Grove Cemetery in Free Soil. Friends may greet his family on Wednesday from 11:00 am until time of services at the church. Those who wish to remember Versal with at memorial donation are asked to consider the Cleveland Clinic or Our Savior Lutheran Church Missions.

Once a farmer, always a farmer holds far more meaning than the simple statement would suggest and could easily sum up the life of Versal Beemer. Versal Vernard Beemer was born on Monday, January 4, 1926 in the small farming community of Morley,... View Obituary & Service Information

The family of Versal V. Beemer created this Life Tributes page to make it easy to share your memories.

Once a farmer, always a farmer holds far more meaning than the...

Send flowers to the Beemer family.