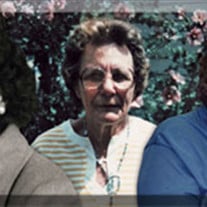 VICTORIA'S LIFE STORY:With a life that spanned more than a century, Victoria Edel made the most of each and every day and in so doing, created a lasting impact on the world around her. She possessed an unwavering faith that served as her constant... View Obituary & Service Information

The family of Victoria Mary Edel created this Life Tributes page to make it easy to share your memories.

VICTORIA&#39;S LIFE STORY:With a life that spanned more than a century,...

Send flowers to the Edel family.