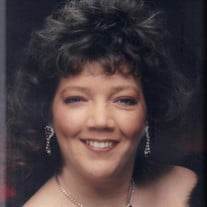 Victoria Jean “Vicki” Trim, aged 56 of Branch, MI passed away on Thursday, September 24, 2015 at Spectrum Health Ludington Hospital. Vicki was born and grew up in VanWert, Ohio as Vicki McNall and married Michael Eversole in 1977. She later married Steve "Butch" Anderson and he preceded her in death in 1998. On November 23, 2001 she married Daniel Trim in Ypsilanti, and they have celebrated 13 years together. Vicki worked many years as the staff manager for Ford Motor Company cafeteria’s throughout the Metro Detroit area. She was a member of the Women of the Moose Chapter #286, The Fraternal Order of Eagles Lodge #2250, the American Legion Post #282 Women’s Auxiliary, and the VFW Post #5096 Women’s Auxiliary. Vicki loved caring for her family and riding her Harley Davidson with Dan, but mostly looked forward to spoiling her grand babies as much as possible. Vicki will be greatly missed by her husband Daniel of Branch, her daughter Kori (Eversole) Massey and husband Eric of Taylor, her son Jimmy Anderson and wife Andrea of Ypsilanti, her stepchildren Robyn Durant and husband Matthew of Fenton, Crystal Bye and husband Brian of Hartland, and David Trim and wife Jennifer of Ypsilanti, her precious grandchildren Tyler, Arianne, Alliyah, Mackenzie, Kayla, Blake, Kendall, and Sophia, several brothers and sisters including Laura Alexander and husband Tim, and Jessie McNall and wife Teri, her aunts Marie “Boots” Thompson, Frankie Stevens, and Deb Alger, and many other relatives and friends. Vicki was preceded in death by her mother and stepfather Wilma and Jerry Bollenbacher. A private family gathering will be held for Vicki on Tuesday at Wyman Funeral & Cremation Services – Stephens Funeral Home in Scottville.

The family of Victoria Jean Trim created this Life Tributes page to make it easy to share your memories.

Send flowers to the Trim family.