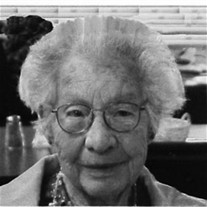 Viola M. Padgett, aged 87 of Free Soil, passed away on early Tuesday morning, May 26, 2009 at Mercy General Health Partners in Muskegon. Viola was born on the family farm in Victory Township on April 13, 1922 to Earl and Philomina (Schneider) Hargreaves, and attended Victory School. On January 24, 1942 she married Charles E. Padgett in Ludington, and they celebrated 19 years together before he preceded her in death on July 20, 1961. Viola worked many years at Star Watch Case in Ludington, and later at Baxter Cleaners in Muskegon. Viola also volunteered her time helping others by giving rides to doctor’s appointments and caring for the elderly in their homes. She loved to play Bingo with her friends at the Tallman Lake and Free Soil Senior Centers, where she rarely missed a week. Travelers along North US 31 marveled at the beautiful flower garden in her yard, and her family especially enjoyed her crocheted handiwork. Viola spent many pleasant hours watching the many birds that visited her home, and she was easily talked into a turn at Polka dancing. Besides her husband Charles, she was preceded in death by her parents, her daughter Arlene Corey on September 14, 2001, her son Edwin, her brothers Lawrence and Ernest Hargreaves, and her sister Pearl Hargreaves. Viola will be greatly missed by her children Ernest (Connie) Padgett of Mt. Pleasant, North Carolina, Albert Padgett, Ella (Richard) Lemire, and Ervin (Peggy) Padgett all of Scottville, and Alvin Padgett of Pageland, South Carolina; her son-in-law Leonard Corey of Beulah; her brothers and sisters Charles (Betty) Hargreaves and Garland (Diane) Demkey all of Ludington, June Holden of Scottville, Charlotte (Herb) Mowry of McBain, Caroline (Dale) Lifer of Manistee, Irene Zack and Marian Hargreaves both of Muskegon; her sister-in-law Donna Hargreaves of Manistee; 21 grandchildren, 40 great-grandchildren, and 13 great, great-grandchildren.

Viola M. Padgett, aged 87 of Free Soil, passed away on early Tuesday morning, May 26, 2009 at Mercy General Health Partners in Muskegon. Viola was born on the family farm in Victory Township on April 13, 1922 to Earl and Philomina (Schneider)... View Obituary & Service Information

The family of Viola Mary Padgett created this Life Tributes page to make it easy to share your memories.

Send flowers to the Padgett family.