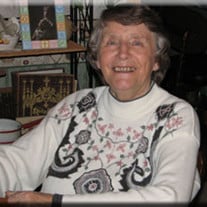 GINI'S OBITUARY:Virginia “Gini” Lipps, aged 84 of Scottville went to be with our Lord early Sunday morning, January 26, 2014 at the Pine Crest Adult Care Home with her family by her side. Gini was born on March 23, 1929 in Free Soil, the oldest child of Albert and Paula (Storm) Ohst, attended Lincoln River School before graduating from Scottville High School with the class of 1947. On June 11, 1949, she married Neven Lipps in Muskegon, and they celebrated 56 blessed years together before Neven preceded her in death in 2005. She was also preceded in death by her parents. Gini was well known for many things in her life and was very proud of her German heritage, the only language she spoke until she began kindergarten. She was very skillful and drafted the building plans for many homes, additions, and remodels. As a farmer, she worked tirelessly beside Neven on their asparagus farm, and took great pride gardening, planting and transplanting many trees. As a wife and mother, she was in her glory building a strong and loving family, and especially enjoyed making Christmas a celebration for her grandchildren. Her legacy will be left with her strong faith in God and as a prayer warrior. Her refrigerator was always decorated with her prayer lists of joys and concerns for her family and friends, whom she prayed for daily.Gini will be lovingly remembered by her children and their spouses Deb and Jim Hobbs of Cass City, Tim and Cathy Lipps of Mt. Pleasant, Mark and Jeanne Lipps, Steve and Dawn Lipps, and Joel and Sally Lipps all of Scottville, her grandchildren Ben (Ashlyn) Hobbs, Sam (Anne) Hobbs, Dave (Kaitlin) Hobbs, Sarah (Nate) Phillips, Josh Lipps, Erin (Ken) White, Mike (Molly) Lipps, Hannah (Steve) Fraleigh, Mark Lipps, Ethan Lipps, Ryan (Jennifer) Lipps, Liz (Jay) Wenzel, Matt (Amber) Lipps, Jon (Rachel) Lipps, Chris (Courtney) Lipps, Alexis (Jeff) Manley, Nathan Lipps, Michael Lipps, Mandi Lipps, and Sam Lipps, her precious great-grandchildren Maxwell, Isaac, Ava, Gabriel, and Baby Hobbs, Elijah Phillips, Nevin and Madison White, Justin and Devon Lipps, Madelyn, Lily, Ethan, and Wyatt Wenzel, Avery, Caleb, Olivia, Jacob, Mia, Chloe, and Baby Lipps, Silas, River, Juno, and Pilot Manley, her brothers Verne Ohst of Wheaton, IL and Gerry (Charlotte) Ohst of Vista, CA, her sister Patti (Dave) Batzer of Bad Axe, and numerous nieces, nephews, cousins, and dear friends.Funeral services will be held for Gini at 11:00 AM on Saturday, February 1 at CORNERSTONE BAPTIST CHURCH in Ludington with her pastor, Rev. James Peterson, and her friend Rev. Norman Letsinger officiating. Burial will take place at Trinity Lutheran Cemetery in Manistee. Friends may meet with her family for a time of visitation on Friday from 5:00 – 8:00 PM at the STEPHENS FUNERAL HOME in Scottville, and on Saturday morning from 10:00 – 11:00 AM at the church. Those who wish to make memorial contributions are asked to consider Pine Crest Adult Care Home in Scottville, or Harbor Hospice.

The family of Virginia Marie Lipps created this Life Tributes page to make it easy to share your memories.

Send flowers to the Lipps family.