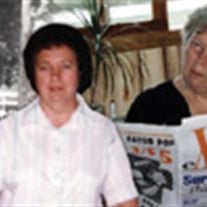 Virginia Soberalski was a very special woman who dedicated her life to her family. Always caring and thoughtful, she found great happiness in the simple pleasures of life. From her early days in Custer, Michigan, through her wonderful life with her husband, Gerald, and their three children, to her final days as a loving grandmother and great grandmother, Virginia knew that true hospitality began in the heart.With the Great Depression hanging over the country, the year 1934 was a time of difficulty for all Americans, whether you lived in a city or out in the country. The unemployment rate pushed toward new heights, and those who had jobs were often underpaid and overworked. It was a challenging time, but Wilbur Mathews and his wife, Laura (Stoevsand), maintained their positive spirits by focusing on a new blessing in their lives. On November 4, 1934, the couple welcomed the birth of their daughter, Virginia Mae.Virginia was born at home on their family farm just southwest of Custer, Michigan. It was the same house her mother had been born in years earlier. Virginia’s parents both worked hard farming their land to provide for their family. Because they lived out in the country, Virginia had to walk quite a ways to attend Fern School, but she went on to graduate from Scottville High School. In later years, Virginia made sure her children and grandchildren knew how good they had it by telling them stories of her childhood.Virginia was in her late teens when she met the love of her life, Gerald Soberalski, at an auction sale. Their paths, however, would not cross again for six months. They were out with friends when they encountered one another, and Gerald wasted no time in asking Virginia out. The two spent their first date floating around the dance floor in each other’s arms at a dance hall diner north of Ludington. After that evening, the sweethearts were inseparable and were eventually married at the Scottville United Methodist Church on October 1, 1954. While settling into married life together, Gerald and Virginia worked on the family farm together. After they were blessed with their three children: Debbie, Doug and Darlene, Virginia stayed home to devote herself to the role of a mother. One of her kid’s fondest childhood memories was coming home from school and being welcomed by the sweet smell of warm cinnamon rolls, fresh baked bread or her great chicken dinners. She was a wonderful cook!For Virginia, family was the greatest source of happiness in her life. She loved nothing more than to spend time with her kids and grandkids, or come home from a long day of work, and unwind with her husband Gerald on the porch swing or deck. It was the simple things that meant the most to Virginia. She looked forward to big family gatherings every Easter, when they had a shrimp boil and hid baskets for all the grandkids. Virginia loved the festivities at Christmas too, and decorating the house with holiday lights.As a couple, Virginia and Gerald still loved to go dancing, especially the polka, and spending time snowmobiling together in the wintertime. Every fall, the couple looked forward to celebrating their anniversary in the Upper Peninsula in their motor home and taking color tours of the breathtaking landscape famous that time of year. On other occasions, they enjoyed going to the casinos with family and friends to play some of those one-armed bandits. At home, they liked to get a good card game going, particularly poker, which they taught the grandkids to play. Virginia also played bingo at the Custer VFW and Scottville Optimist, and bowled on a few leagues. In her quieter moments, she liked to crochet and knit something for her family.Virginia’s greatest joy was sharing herself with her family, offering them the most precious thing she possessed – her time. It is a gift none of her family will ever forget.Virginia Mae Soberalski died on Thursday, September 18, 2008, at Memorial Medical Center in Ludington following a lengthy illness. She will be greatly missed by her children: Debbie “Ruby” Soberalski, Doug and Cookie Soberalski, all of Ludington, and Darlene “Punky” and Jeff Warden of Scottville; her mother, Laura Lamrock of Scottville; her grandchildren: Tammy Lowe, Gary Soberalski and his friend, Roxanne, Tricia (Rob) Dilliner, Douglas Soberalski and his friend, Teri, Brian (Nicole) Soberalski, Chad and Maria Nelson, Melissa (Jeremy) Larson, Jessica Hoekwater and her friend, Frank, and Chelsea Warden; 16 great-grandchildren; her brother, Wilber (Lou) Mathews of Fremont; her sister, Bernadine (Norm) Wright of Muskegon; and several nieces and nephews. Virginia was preceded in death by her husband of 49 years, Gerald Soberalski, her father, Wilbur Mathews, two brothers: William Mathews and Wayne Lamrock; and her sister, Ila Stoevsand.

Virginia Soberalski was a very special woman who dedicated her life to her family. Always caring and thoughtful, she found great happiness in the simple pleasures of life. From her early days in Custer, Michigan, through her wonderful life with... View Obituary & Service Information

The family of Virginia Mae Soberalski created this Life Tributes page to make it easy to share your memories.

Virginia Soberalski was a very special woman who dedicated her...

Send flowers to the Soberalski family.