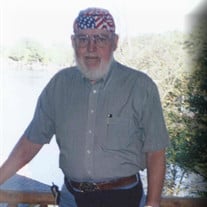 WALTER'S LIFE STORY:A man of honor, integrity, and unconditional love for his family, Walter J. Olmstead, Sr. was a genuine blessing in the lives of those around him. He was a true gentleman if ever there was one and a firm believer in the notion... View Obituary & Service Information

The family of Walter J. Olmstead created this Life Tributes page to make it easy to share your memories.

Send flowers to the Olmstead family.