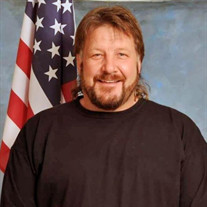 Wayne Michael Rinkevicz Sr. aged 56 of Branch passed away peacefully on Monday, October 25, 2021. Wayne was born on March 10, 1965 in Ludington, the son of Ronald J. and Donna (Petersen) Rinkevicz and graduated from Mason County Central High School with the class of 1983. Following high school, Wayne proudly served in the United States Air Force where he worked as a Crew Chief on F-15’s in Alamogordo, New Mexico. His time in the Air Force only intensified his love of flying. He was a member of the Experimental Aviation Association and recently completed his lifelong desire of becoming a pilot by earning his sport pilot license in 2018. He was also a member of the American Legion Post 76 in Ludington, the AmVets Post 1988 in Baldwin and the Arborist Tree Society. Wayne loved being up in the air off the ground and worked 18 years as a Journeyman Lineman for Great Lakes Energy before starting Totally Trees, a tree trimming business in 2004 with Michael Johnson. Totally Trees, served both Michigan and Florida. Always looking for something to do, Wayne also enjoyed fabricating and building work equipment around his home. Wayne was preceded in death by his father Ronald, his brother Dale, and his 2nd dad - Gordon Briggs. He will be greatly missed by his wife Terri Bogner; his sons Wayne Rinkevicz Jr. (Shayla Savich), and Jordan Rinkevicz of Branch; his stepdaughter Rosemary (Chris) Rapes of Walkerville; his granddaughter Sarica Savich; his mother Donna (Hank) Heynen of Florida; his siblings Ruth Rinkevicz of Grand Rapids, Janet (Jim) Shinsky of Ludington, and Mark Rinkevicz of Grand Haven; his brothers and sisters-in-law Cheryl Bogner of Mt. Clemens, Roger (Christine) Bogner of Ludington, Ronald (Rhonda) Bogner of Muskegon, and Mitchell (Toni) Bogner of Branch; his special friends the Briggs Family of Scottville, his apprentice employees at the tree service and numerous nieces, nephews, cousins, many great friends and his faithful Giant Schnauzers, Zsa Zsa and Daisy. A ceremony to celebrate Wayne’s life will be held at 11:00 am on Saturday, November 6 at Wyman Funeral & Cremation Services in Scottville with gathering of friends & family starting at 10:00 am. The family will hold a celebration of Life in 2022 and notice will be printed in the newspaper. Those who wish to remember Wayne with a memorial donation are asked to consider the Scottville Pop Warner Football program (201 North Reinberg Avenue, Scottville, MI 49454), or any youth recreation program as Wayne loved working with and teaching kids the love of the game.

The family of Wayne Rinkevicz Sr. created this Life Tributes page to make it easy to share your memories.