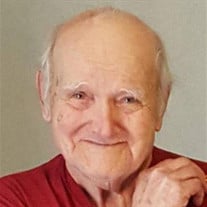 Wayne Edward Wilkes aged 92 of Branch passed away on Tuesday, December 12, 2017. Wayne was born on June 17, 1925 in White Pigeon, the son of Charles and Arlene (Baldwin) Wilkes Sr. and married Norma Jacquelyn Clay in 1945. Wayne worked for Goodyear Tire and Rubber while also maintaining a small farm in Bundy Hill near Jackson. He and Norma enjoyed traveling together, and while visiting Mason County, fell in love with the area. Following his retirement, they moved to Branch where Wayne was able to thoroughly enjoy his love of the outdoors - fishing, hunting, splitting wood, and woodworking. He also liked to tinker with small engine repair but found his greatest joy in spending time with his family, especially his grandchildren. Whatever his family needed, Wayne could always be counted on. Wayne was preceded in death by his wife of 71 years Norma, his brothers Bill, Bob, Bud, Harold, and John, and his sister June. He will be greatly missed by his son Frank Wilkes (Suzy Mulnix) of Branch, his grandchildren Norma (Mike) Sheffield of Ludington, Tressa (Mike) Steffes of Walkerville, Paul Wilkes and friend Tommy Swaenepoel of Jackson, and Larry Wilkes of Grant, 10 great-grandchildren, 16 great, great-grandchildren, numerous nieces and nephews and his beloved cat Callie. A service celebrating Wayne’s life will be held at 4:00 pm on Friday, December 29 at the Scottville United Methodist Church with Rev. Rick Hodgeson officiating. Those who wish to remember Wayne with a donation are asked to consider his family.

The family of Wayne Edward Wilkes created this Life Tributes page to make it easy to share your memories.

Wayne Edward Wilkes aged 92 of Branch passed away on Tuesday,...

Send flowers to the Wilkes family.