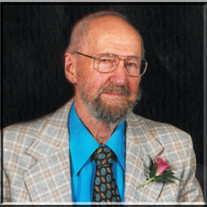 BERT'S OBITUARY:Wilbert C. "Bert" Wagner, age 85, of Marquette, formerly of Custer, passed away Monday, November 11, 2013 at the Mill Creek Memory Care Community where he’d been a resident for over 7 months. Bert was born April 21, 1928 in Sherman Township, to Godfrey and Linda (Knoll) Wagner and grew up on the family farm with his father and older brother, Aldis. After attending high school in the area, he went on to graduate with a Bachelor’s degree from Michigan State University. In 1950, he married Eleanor Courtland and held various jobs before being called to serve in the Army, where he was stationed stateside for almost 4 years as a Gunnery Officer until 1956.Bert began working for the State of Michigan with the DNR in Marquette as a Research Fisheries Biologist soon after leaving the Army. During his over 40 plus year career with the DNR, he worked on many projects – the most memorable to his family was Lamprey Control because he brought live samples home and kept them in a fish tank overlooking the dining room table.In addition to his work, raising a family, and building his own home from the basement on up, Bert went on to earn his Master’s degree from Northern Michigan University in 1975. He also studied for and obtained an Amateur Radio License, and used the designation on his personalized license plate for many years.Bert was well known for the precision he applied to daily activities and projects which encompassed such items as measuring outside temperatures, fish lengths, building wooden boxes, or planting tulips and trees. He also enjoyed a good laugh from a joke or a story, often telling the family not to buy him gifts but to just give him funny cards which he would keep and reread many times.After Eleanor’s death in 2009, Bert’s constant companion was Wilma, a furry feline he adopted from the animal welfare shelter (UPAWS). They spent many hours napping together on the couch in the afternoon sunshine. With daily visits from family and Arcadia Home Care, Bert was able to stay in his home until the move to Mill Creek this past spring.Bert will be lovingly remembered by his five children – Debra (Jack) Eibler of Negaunee, Chuck (Sarah) Wagner of Bartlett, IL, Cindy (Ed) LaMere of Marquette, Carl (Paula) Wagner of Marquette, and Sam Wagner of Ironwood; 6 grandchildren – Christina, Stephanie, Amy, Elizabeth, Tammy and Kristy; 4 great grandchildren – McKayla, Harley, Stella, and Annabelle; and a great, great granddaughter, Aria.Friends may meet with Bert's family for a time of visitation on Monday, November 18 from 10:00 - 11:00 am at the Stephens Funeral Home in Scottville, followed by a graveside service with military honors at the Sugar Grove Cemetery. In lieu of flowers, if you wish, memorials may be directed to UPAWS (84 Snowfield Rd, Negaunee, MI 49866) or Alzheimer's Association.The family wishes to thank the staff at Mill Creek for their kind care and the treatment they gave Bert during his residence and to Lake Superior Hospice for their assistance during his final hours.

The family of Wilbert Carl Wagner created this Life Tributes page to make it easy to share your memories.

Send flowers to the Wagner family.