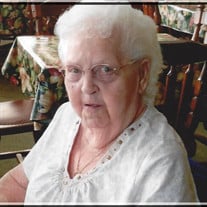 Willadeen “Billie” Rader, age 89 of Branch, passed away on Monday, August 25, 2014 at Spectrum Health Ludington Hospital. Billie was born on November 15, 1924 in Oceana County, the daughter of John and Olga (Holtz) Teichthesen, and graduated from Montague High School with the class of 1942. On November 11, 1944, she married Richard “Dick” Rader in Montague and they celebrated 49 years by each other’s side until Dick preceded her in death in 1993. Billie was very active in her community where she served on the Sweetwater School Board, was a member of the Order of Eastern Stars in Baldwin and Scottville, bowled on the Baldwin Bowling League for many years, and worked for Lake County Abstract Co in Baldwin for over 40 years. Her greatest joy came in the presence of her family. She exemplified a “Farmer’s Wife” by helping Dick on the farm wherever he needed her, milking cows, driving tractor, harvesting crops, etc… She always looked forward to hunting season and bagging the first and biggest buck in the family every year, loved to play cards and square dance with her family and friends, and enjoyed wintering in Florida with Dick. Along with her husband, Billie was preceded in death by her son Ronald Rader, her daughter-in-law Susan Rader, her grandson Ronson Rader, her great-grandson Adam Rader, and her sisters Eleanor Stevens, Bonnie Gifford, and Mildred Reavey. Billie will be greatly missed by her sons Daniel Rader of Ludington, and Buster (Mally) Rader of Branch, her daughter-in-law Verna Rader of Branch, her grandchildren Barry (Bridget) Rader, Tim (Stefanie) Rader, Becky (Tom) Johnson, Richard (Stacy) Rader, Jonathan (Maria) Rader, Kevin (Marla) Rader, Kimberly (Mike) Tenney, Joseph Rader, and Ron (Terry) Newcomb, 18 great-grandchildren, 2 great, great-grandchildren, her sister-in-law Dorothy Rice of California, her brother-in-law Charles Reavey of Montague, and many nieces and nephews. Friends may gather with her family at 1:00 PM on Sunday, September 7 at Carr Hall in Branch for a luncheon and time of remembrance. Private graveside services will be held at Evergreen Cemetery in Branch. Those who wish to make contributions in Billie’s memory are asked to consider the American Cancer Society.

The family of Willadeen "Billie" Rader created this Life Tributes page to make it easy to share your memories.

Willadeen “Billie” Rader, age 89 of Branch, passed away on Monday,...

Send flowers to the Rader family.