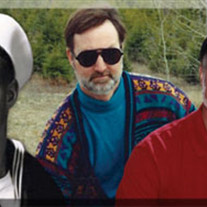 BILL'S LIFE STORY:William “Bill” Knodel was a man motivated, not by material gains in life, but by the satisfaction of putting his family and friends first in his life. Whatever the task at hand, he demanded the best of himself, and his strong analytical thinking led the process. Bill enjoyed traveling, fishing, golfing and bowling, but most of all, spending time with his beloved family and friends.The year 1946 was a grand mixture of events, both historical and trivial. For the history books, President Harry Truman officially proclaimed an end of hostilities in World War II. For the trivia buffs, Frank Capra’s “It’s a Wonderful Life”, starring Jimmy Stewart premiered, and the bikini made its fashion debut. For Elmer and Margaret (Weider) Knodel of Pittsburgh, Pennsylvania, 1946 was a wonderful year for them as they welcomed the birth of their son, William, on January 19th. Bill and his older sister Peg lived with their parents in the suburbs of Philadelphia. After their father’s untimely death, Margaret moved the young family to southeast Michigan, where she could continue her career as a social worker and support her children. They settled in the town of Melvindale, a downriver suburb of Detroit, and Bill attended the Bloomfield schools. After graduating from Bloomfield High School in 1964, Bill moved with his mother to Florida and attended West Palm Junior College for a year. Following the patriotic calling of the time, he then enlisted in the U.S. Navy. He proudly served his country during the Vietnam Conflict, assigned as a corpsman with a Marine unit for the 18 months he served overseas.Upon his discharge from the service, Bill returned to Michigan to attend Ferris State University College of Pharmacy. He graduated in 1974 and began an internship at Memorial Medical Center in Ludington. Following his internship he worked in Saginaw for a short while before returning to work at the hospital in Ludington. While working at the hospital, he met and became friends with Julie Barber. As acquaintances, they bowled together occasionally and eventually started to date. Their dating became more serious and they were wed on November 12, 1976 at St. Simon’s Catholic Church in Ludington. They enjoyed their years together, spending time traveling to many different places – New Zealand, Germany, Florida, Arizona, and – their favorite – Hawaii.He continued to enjoy bowling and loved the game of golf, playing the links as well as watching on TV. He was always engaged in pursuing some interest: fishing, reading, and playing his card game of choice – setback. An analytical thinker and competitive by nature, Bill’s games were more than just recreation for him. In fact, the pursuit of a win was the one thing that could bring forth a show of temper from him. Bill was very methodical, and most everything was done efficiently and logically. When making purchases, everything was thoroughly researched and the details inspected. He was also a pack rat of sorts and kept anything he thought he might once again need. Truly a gadget man, if you could plug it in and it had lights, sounds and buttons, he was in heaven. He could spend hours in an electronics store, going through every item in great detail. Bill was a member of St. Jerome Catholic Church in Scottville where he served as a communicant. He was also actively involved in giving back to his community. A member of the Scottville Optimist Club for many years, he was currently serving as the club’s President and played golf in the Optimist League at Lakeside Links. He was also a member of the American Legion Post 76 in Ludington, the Michigan Pharmacists Association, bowled on a league with the Scottville Fire Department’s team at Country Lanes and was a member of the former Scottville Jaycees.He worked as a dedicated and respected pharmacist at Memorial Medical Center for 33 years, retiring in 2008 to spend time enjoying the fruits of his many years of work and dedication. He had also worked part-time for Perry Drugs in Manistee and Nichols Drug Store in Scottville. Bill was known for his very dry sense of humor, and was good company to be around. He settled in for conversations with friends and family, and they could be counted on to never be too short. He enjoyed a well-made “rusty nail” when beverages were served in good company. Along with the joy of family and friends, Bill counted on the trusted companionship of his beloved dog, Gizzy.William Conrad Knodel died peacefully at his home on Monday, June 7, 2010. He was preceded in death by his parents Elmer and Margaret. Bill will be greatly missed by his wife of 33 years Julie; his sister Peg Boland of Yreka, CA; his Father and Mother-in-law Buzz and Loretta Barber of Ludington; his sister-in-law Jackie Conant of Lexington, KY; his brother-in-law Buzzy (Lisa) Barber of Ludington; his nieces Jamie Conant of Midland, and Justine (Robbie) Parks of Kentucky, and Stacy (Cylus) Doane of California; his nephews Adam Barber of Ludington, Brandon Barber of Iowa, and Kevin Boland of Ohio; and his great-niece Anastasia Parks.The Celebration of Mass will be held for Bill at 11:00 AM on Friday, June 11 at the St. Mary’s Catholic Church in Custer, with Rev. Mike Cilibraise as celebrant. Friends may meet with his family for a time of visitation on Thursday from 6-9 PM at the Stephens Funeral Home in Scottville. Those who wish to make memorial contributions are asked to consider making them to Julie to help with his medical expenses.

BILL'S LIFE STORY:William &#8220;Bill&#8221; Knodel was a man motivated, not by material gains in life, but by the satisfaction of putting his family and friends first in his life. Whatever the task at hand, he demanded the best of himself,... View Obituary & Service Information

The family of William ""Bill"" Knodel created this Life Tributes page to make it easy to share your memories.

Send flowers to the Knodel family.