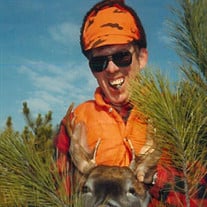 William James “Bill” Bradow aged 77 of Scottville, formerly of Chicago, passed away peacefully with his family by his side on Monday, August 17, 2020. Bill was born on November 8, 1942 in Chicago, IL the son of Louis and Barbara (Buxbaum) Bradow and grew up in the Chicago area attending St. Andrew’s Catholic School before graduating from St. Michael’s Catholic High School with the class of 1960. On March 3, 1966 he married Alexis Lapenas Gestes in Chicago and they have celebrated 54 years by each other’s side. Bill furthered his education at Roosevelt University in Chicago, earning his Bachelor Degree in Computer Science in 1972. He worked as a computer programmer for Western Electric (now AT&T) for 14 years before moving to Michigan and working 33 years for Howmet Aerospace in Whitehall. Bill and Alexis operate the LaBranz’s Asparagus on their farm south of Scottville. Bill loved to hunt and always looked forward to getting together with his longtime friends Ray & Lorrie, Tully & John, Tom, and Joe every year during deer season. He also loved the Michigan outdoors where he could enjoy playing softball with the Howmet team in the summer, and snowmobiling around Mason County in the winter. Bill was preceded in death by his parents Louis and Barbara; his wife’s parents Alex and Frances Lapenas; his sister Barbara Peplansky and her husband Don; his sisters-in-law Ann Trenner and Linda Bradow; and his brother-in-law Don Bergers. He will be greatly missed by his beloved wife Alexis; their daughter Alexandria (Mike) Lane of Brooklyn, MI; stepdaughters Emily (Christian) Gestes-Schueler of Owosso and Francine (Michael) Gestes-Linkovich of Boynton Beach, FL; their grandchildren Matthew (Rebecca) Lane of Jackson, and Westin Lane of Onsted, Danielle Schueler of Lansing, and Zachary Schueler of Owosso; his great-grandchildren Vanessa and Levi; his brother John Bradow of Chicago; his sisters-in-law Sonia Bergers and Diana Ames both of Grand Rapids; and numerous nieces, nephews, cousins, and many great friends such as Steve Seaberg. Due to COVID-19, private family services will be held and burial will take place at Brookside Cemetery in Scottville. Those who wish to remember Bill with a memorial donation are encouraged to make it to the Mason-Lake Soil Conservation District, 655 N. Scottville Rd., Scottville, MI 49454.

William James &#8220;Bill&#8221; Bradow aged 77 of Scottville, formerly of Chicago, passed away peacefully with his family by his side on Monday, August 17, 2020. Bill was born on November 8, 1942 in Chicago, IL the son of Louis and Barbara... View Obituary & Service Information

The family of William James Bradow created this Life Tributes page to make it easy to share your memories.

Send flowers to the Bradow family.