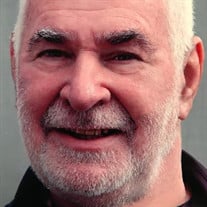 William “Bill” Allen Seeback aged 82 of Muskegon passed away on December 2, 2017. Bill was born on August 20, 1935 in Detroit, the son of William and Grace (Allen) Seeback. In 4th grade, he moved with his family to Scottville where he attended school and graduated from Scottville High School with the class of 1954. Bill attended Michigan State College, majoring in music and also played in the marching band and orchestra. When Michigan State played in the Rose Bowl in 1955, it was a highlight of his marching band experience to march in the parade and at the game. While in high school, Bill played the bagpipes during halftime at football games. After graduating with his Bachelor of Arts degree and later his Masters degree, Bill taught for the Birmingham, MI school systems before working for the State of Illinois Council of the Arts. Bill later returned to Michigan, living in Muskegon where he opened a restaurant. He was a gourmet cook and enjoyed demonstrating his skills for family and friends. Bill also returned to the classroom, teaching at Muskegon Community College and Grand Valley State University. He enjoyed traveling, especially to Europe where he visited twice. Bill was preceded in death by sisters Jenny and Amanda as well as his parents Phyllis and Bill Seeback, grandparents William and Jennie Allen, as well as John and Florence Biegalle. Bill will be greatly missed by his sister Connie Rasmussen and husband Bob of Scottville, his brother Mark Seeback and wife Phyllis Alvesteffer of Pentwater, his nieces and nephews Todd and Lori Rasmussen of Muskegon and their children Ruth, Madison, Olive, and Nash; Nick and Lindsay Rasmussen of Dellwood, MN and their children Ava and Drew; Neil Rasmussen of Jackson, Cara and Tom Lauber of Gaylord; Mike Seeback of Big Rapids; Dan and Stacey Seeback of Greenbrier, TN and their daughter Sydney; Samantha and Chris Hoaglund of Alpharetta, GA and their daughter Emma. Bill also leaves behind the many good friends he has gained over the years. According to his wishes, cremation has taken place and there will be no funeral services at this time. A Celebration of Bill’s life will be held at a later date.

The family of William A. Seeback created this Life Tributes page to make it easy to share your memories.

Send flowers to the Seeback family.