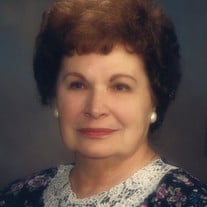 Wilma R. Diesing aged 97 of Chelsea, MI formerly of Scottville passed away on March 24, 2019 at Silver Maples of Chelsea. She was born September 7, 1921 the daughter of Oliver and Rose (Tritten) Widing. She married Donald C. Diesing who preceded her in death. She is survived by two sons, David (Jane) Diesing of Chelsea, and Daryl (Marcia Rimai) Diesing of Shorewood, Wisconsin; four grandchildren, Jeffrey (Rebecca) Diesing of Chelsea, James (Mitzi) Diesing of Chelsea, Jennifer (David) Behm of Howell, and Rebecca Diesing of Chicago; four great-grandchildren, Charlotte, Piper, Leighton, and Greyson Diesing, also one sister-in-law, Elaine Diesing of Manistee. In addition to her husband, she was preceded in death by her brother, Donald Widing, and two brothers-in-law Arnold Diesing and Arthur Diesing. Wilma lived most her life in Scottville, where she worked for many years alongside her husband in their family business, Diesing Realty, and her husband’s auction business. She was a long time member of Redeemer Lutheran Church, where she was an active member of the Women’s Guild. She was always happy to help and support charitable and community events and was known for her always positive attitude to others. She moved to Silver Maples in Chelsea in 2009 to be close to her family. While her physical abilities ultimately failed her, she will be remembered for a never failing mind and her interest in others. Funeral Services will be held at 11:00 am on Monday, April 8 at Redeemer Lutheran Church in Scottville with Pastor Richard Miller officiating. Friends may meet with her family for a time of visitation from 10-11 a.m. at the church. Wilma will be laid to rest next to her husband at Trinity Lutheran Cemetery in Manistee. Memorial contributions in Wilma’s name may be made to Redeemer Lutheran Church in Scottville or St. Jacob Lutheran Church in Grass Lake.

Wilma R. Diesing aged 97 of Chelsea, MI formerly of Scottville passed away on March 24, 2019 at Silver Maples of Chelsea. She was born September 7, 1921 the daughter of Oliver and Rose (Tritten) Widing. She married Donald C. Diesing who preceded... View Obituary & Service Information

The family of Wilma R. Diesing created this Life Tributes page to make it easy to share your memories.

Send flowers to the Diesing family.