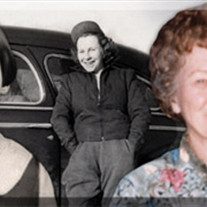 Although petite in stature, Zora Vannett&#8217;s fiery personality and unique red hair made her hard to miss. She was a woman of faith whose vibrancy and zest for life often radiated to those around her. Zora faced a good many hardships throughout... View Obituary & Service Information

The family of Zora Helena Vannett created this Life Tributes page to make it easy to share your memories.

Send flowers to the Vannett family.